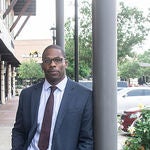 Cortez M. Pouncil relocated from Kansas City, Missouri in 2004 to attend law school in Houston, Texas.  The plan was to move back to his beloved hometown until he found in Houston a sense of enterprise, diversity, and community that could not be ignored. Raised in KC's metropolitan area, Cortez knew he wanted to stand for justice at an early age when he discovered the NAACP Legal Fund and learned of their remarkable contribution to the civil rights movement.  In his teen years, he became involved with his local NAACP Youth Council and began to understand and appreciate individual rights against the backdrop of urban areas and the role of government.

Cortez M. Pouncil is a proud member of Kappa Alpha Psi Fraternity Inc. and has helped people by volunteering and participating in community service through the organization.  He's a husband and a father of four beautiful children and two rescue dogs. His wonderful wife, Crystal is currently practicing as a family nurse practitioner at a clinic located in Katy, Texas.  Together, they enjoy spending time as a family, mainly outdoor activities, vacationing and live music.  Despite his busy schedule, Cortez takes every opportunity he can get to write on topics that interest him.

Mr. Pouncil received a Bachelors of Arts in Social Science and a minor degree in Business Association from Pittsburg State University.  He attended law school at Thurgood Marshall School of Law located in downtown Houston.  He received the honor of being on the Dean's List and participated in Moot Court Competitions.  Cortez's dream of becoming a litigator came into view when he clerked for the Texas Attorney General's office, Kansas City Prosecutor's Office, and interned with the Harris County Attorney's Office. The combination of these experiences helped lay the foundation for becoming a successful trial attorney.

Following law school, Cortez had the unique opportunity to work as a legal document reviewer involving the catastrophic Deep Water Horizon, noted as the largest oil spill in US history.  Next, he became a Brazoria County Assistant District Attorney where he prosecuted cases involving child protection.  This was a very pivotal career move for Cortez because for the first time he was submerged in courtroom experience through a weekly docket of thirty cases or more, jury trials, mediations, and depositions.  More importantly, this was a civil practice so he was able to fine-tunehis desire to practice civil litigation.  He eventually left the DA's office and went on to become in-house counsel as a Regional Attorney for the Texas Department of Family and Protective Services, representing the state agency in multiple counties.

After almost ten years of practicing law, Cortez decided that it was time to move from local government into the private sector and so The Pouncil Law Firm was founded in 2017. The plan is simple…to pursue our client's success with the type of courage, passion, and innovation that'll positively impact their lives forever.

Thank you for contacting us. We will get back to you shortly.

Please complete all required fields below.

Hiring Cortez Pouncil as my attorney was the best decision I ever made. He gave great detail on different options that were available. He was easy to work with being available and calling back in a timely manner. He fought for everything I wanted in my case.